The Center for News Literacy at Stony Brook University is committed to teaching students how to use critical thinking skills to judge the reliability and credibility of news reports and news sources. It is the only center of its kind in the United States.
What is news literacy? | ​Curriculum Toolbox

"Evaluating Information"
"Misleading information published as news is not new to the 21st century.  In the late 19th century we called it "yellow journalism," and its practitioners used sensational headlines and outright fraudulent stories to increase sales. Today, with increasing reliance on both digital news outlets and social media for news, sifting through the messages for non-biased sources requires attention, and possibly reviewing multiple sources--including seeking out a reliable original source." from The American Library Association.

Sometimes it's hard to know what statistics are worthy of trust. But we shouldn't count out stats altogether ... instead, we should learn to look behind them. In this delightful, hilarious talk, data journalist Mona Chalabi shares handy tips to help question, interpret and truly understand what the numbers are saying. "3 Ways to Spot a Bad Statistic," TED Talk, February 2017

As web companies strive to tailor their services (including news and search results) to our personal tastes, there's a dangerous unintended consequence: We get trapped in a "filter bubble" and don't get exposed to information that could challenge or broaden our worldview. Eli Pariser argues powerfully that this will ultimately prove to be bad for us and bad for democracy. "Beware Online Filter Bubbles," TED Talk, March 2011 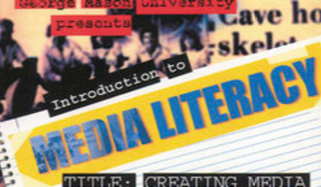 Most students have little experience creating media and assume creating media is an easy process. For newspapers, you collect some information, write a story, type it out and lay it out. With a computer, how hard can that be? Part of the intrigue of media creation is it looks so easy. This program takes students on location to a behind-the-scenes look at a radio station, television news show, a regional newspaper and a national on-line newspaper to see how media is created in a top media market. "Media Literacy: Creating Media" from Kanopy, 2016 (16 minutes)

In this thoughtful talk, David Puttnam asks a big question about the media: Does it have a moral imperative to create informed citizens, to support democracy? His solution for ensuring media responsibility is bold, and you might not agree. But it's certainly a question worth asking. "Does the Media Have a 'Duty of Care'?" TED Talk, February 2014

By the end of this talk, there will be 864 more hours of video on YouTube and 2.5 million more photos on Facebook and Instagram. So how do we sort through the deluge? At the TEDSalon in London, Markham Nolan shares the investigative techniques he and his team use to verify information in real-time, to let you know if that Statue of Liberty image has been doctored or if that video leaked from Syria is legitimate. "How to Separate Fact from Fiction Online," TED Talk, November 2012

Something is very wrong with the news industry. Trust in the media has hit an all-time low; we're inundated with sensationalist stories, and consistent, high-quality reporting is scarce, says journalist Lara Setrakian. She shares three ways we can fix the news to better inform all of us about the complex issues of our time. "Three Ways to Fix a Broken News Industry," TED Talk, January 2017