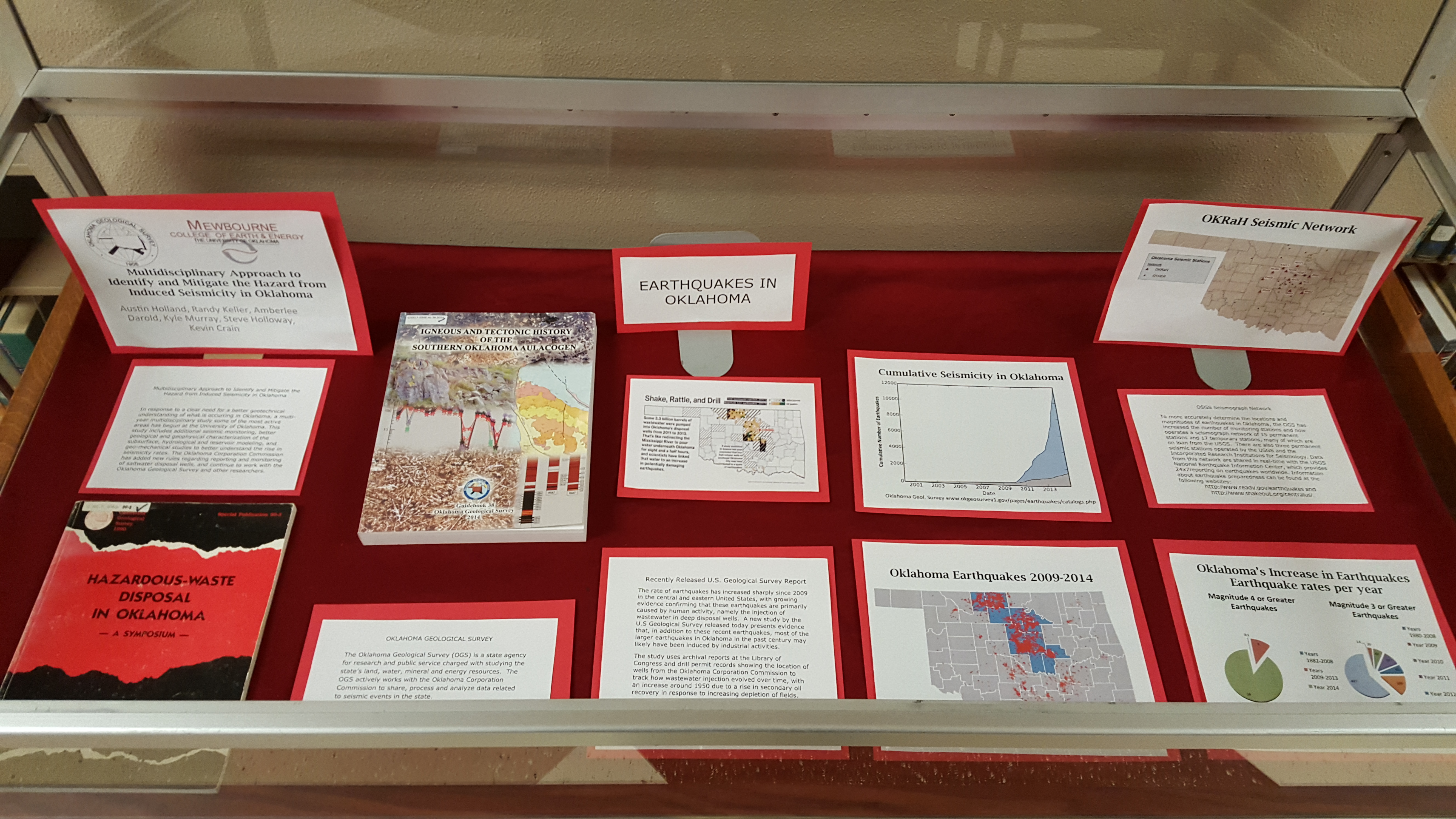 The Government Documents Collection has installed a new display, Oklahoma Earthquakes. The display details the number and potential causes in the increase of earthquakes in Oklahoma.  In 2014 alone, there were 579 earthquakes of magnitude 3.0 or greater in Oklahoma. The previous annual record, set in 2013, was 110 earthquakes, while the long-term average earthquake rate, from 1978 to 2008, was just two magnitude 3.0 or larger earthquakes per year. Oklahoma maintains one of the nation’s most robust seismic monitoring systems.  In fact, OGS began earthquake monitoring 40 years ago with its first seismic station that is still in operation near Leonard, Oklahoma.  This network plays an important role in recording the recent earthquakes in Oklahoma.

The following links will provide additional information to explain and give understanding to this complicated problem. 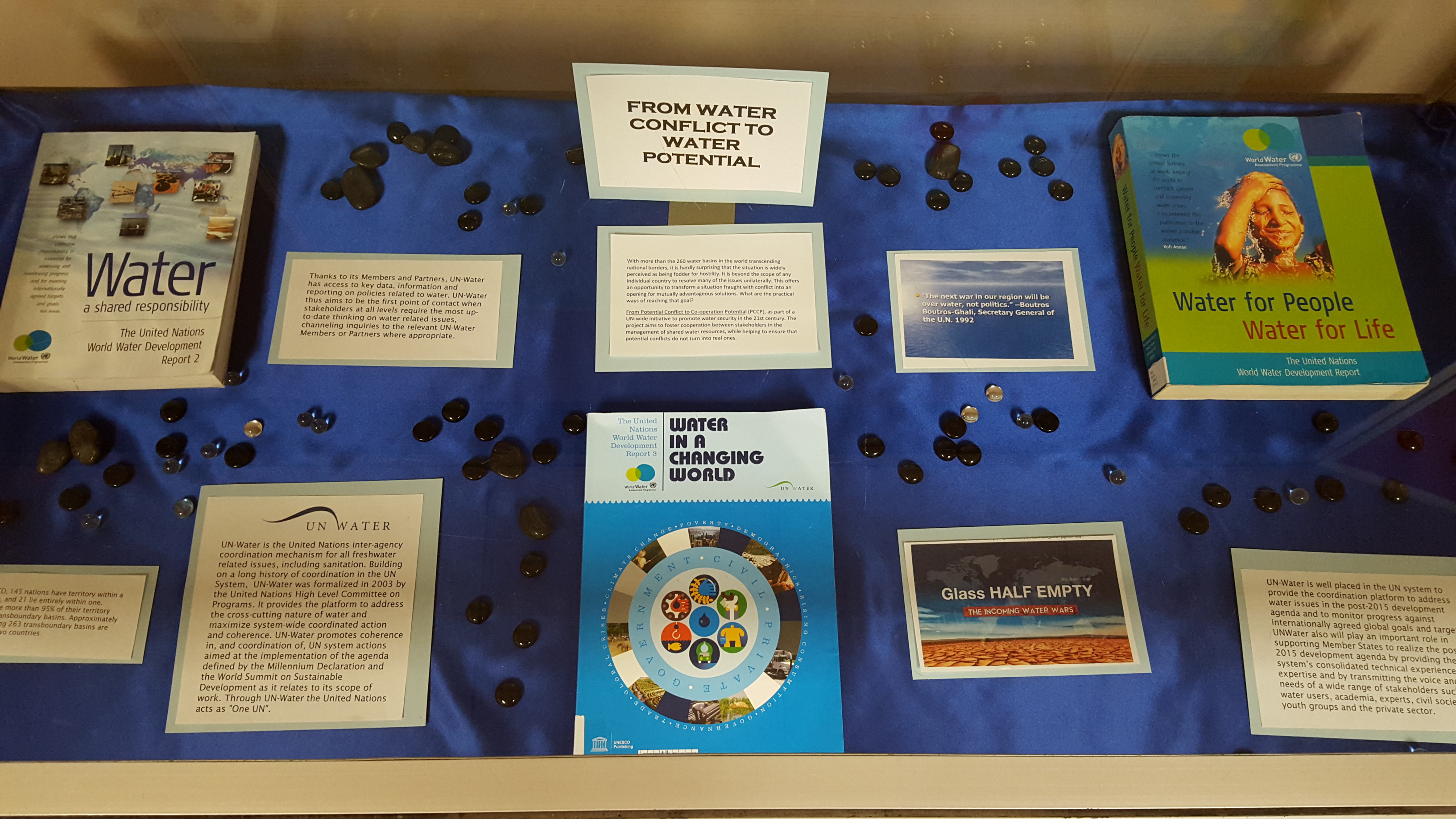 The Government Documents collection has recently installed a new display. The display covers the U.N. Water for Life program, From Potential Conflict to Co-operation Potential (PCCP), as part of a United Nations (UN) wide initiative to promote water security in the 21st century. The project aims to foster cooperation between countries in the management of shared water resources, while helping to ensure that potential conflicts do not turn into real ones.

For more information the following articles will provide in depth history, explanations, and possible solutions to an on going complicated problem.

A second Fall 2015 display outside Government Documents focuses on the Federal Government topic of the recently formed Consumer Financial Protection Bureau (CFPB). The display offers a brief overview of the new bureau's mission and history: Established under Title X of the Dodd-Frank Wall Street Reform Act, Congress established the CFPB to “help consumer finance markets work by making rules more effective, by consistently and fairly enforcing those rules, and by empowering consumers to take more control over their economic lives.” The display has a focus on university students and financial aid resources, in regards to student loan debt. 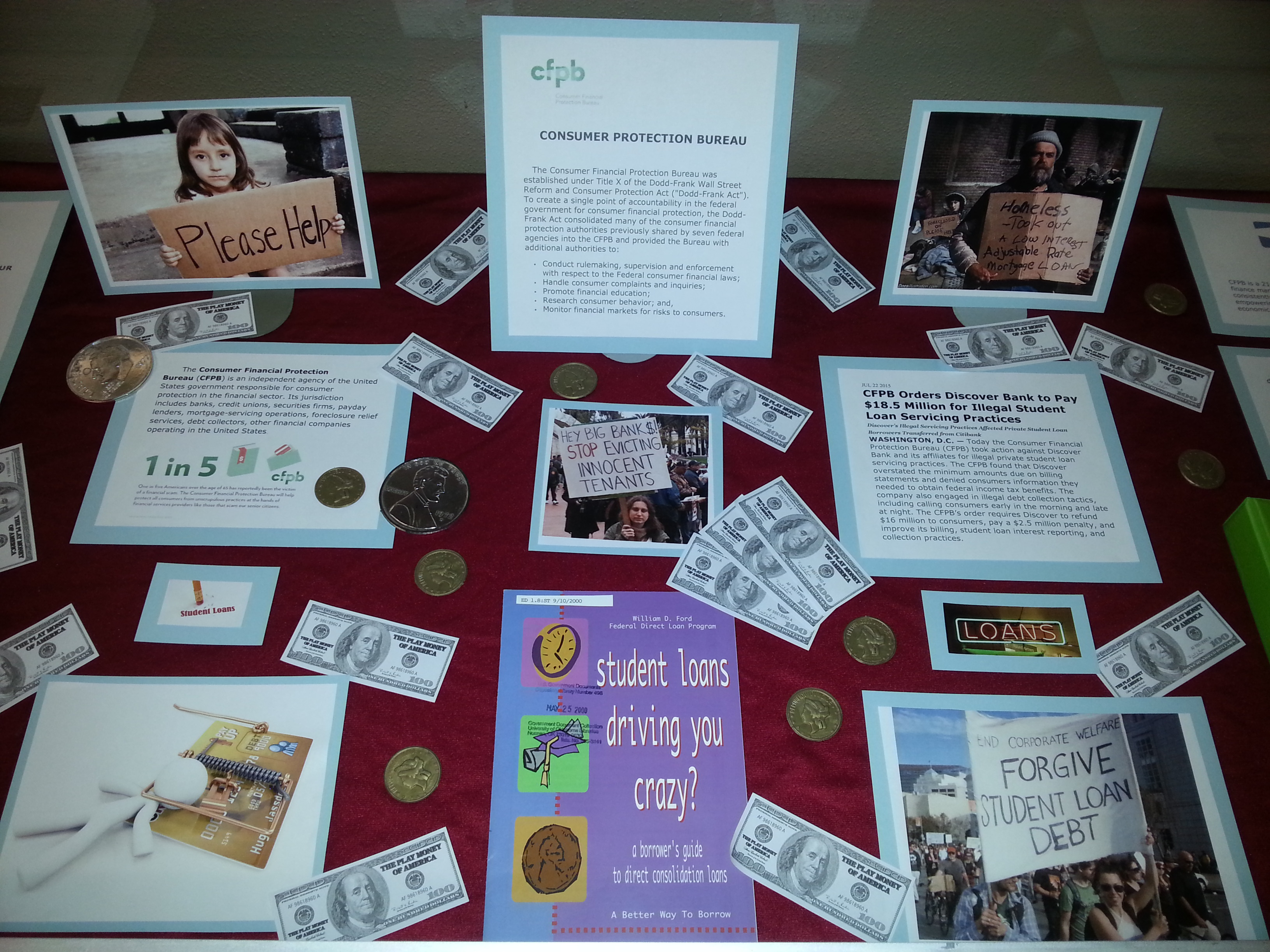 The current international government display is on the topic: European Union Refugee Issues. The display reviews actions taken on the current refugee crisis by the EU as identified in their recently released report, A European Agenda on Migration.  The findings reveal that the EU’s external borders have increasingly been the scene of human tragedies to which the EU has neglected to react. The report states that together with the United Nations, the EU is in the process of formulating a long-range plan and vision to effectively assist the migrants in their journey to safety and resettlement. 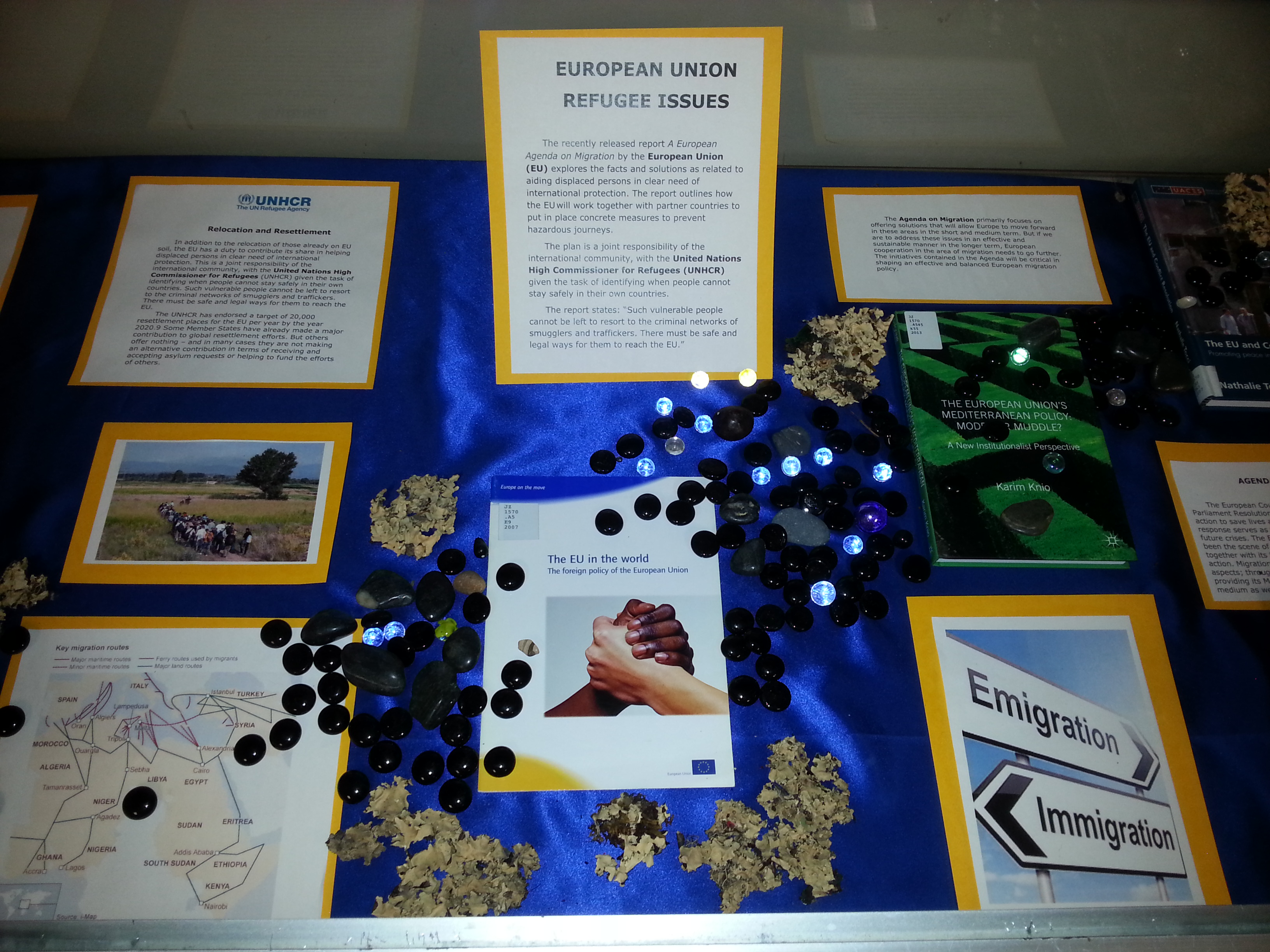 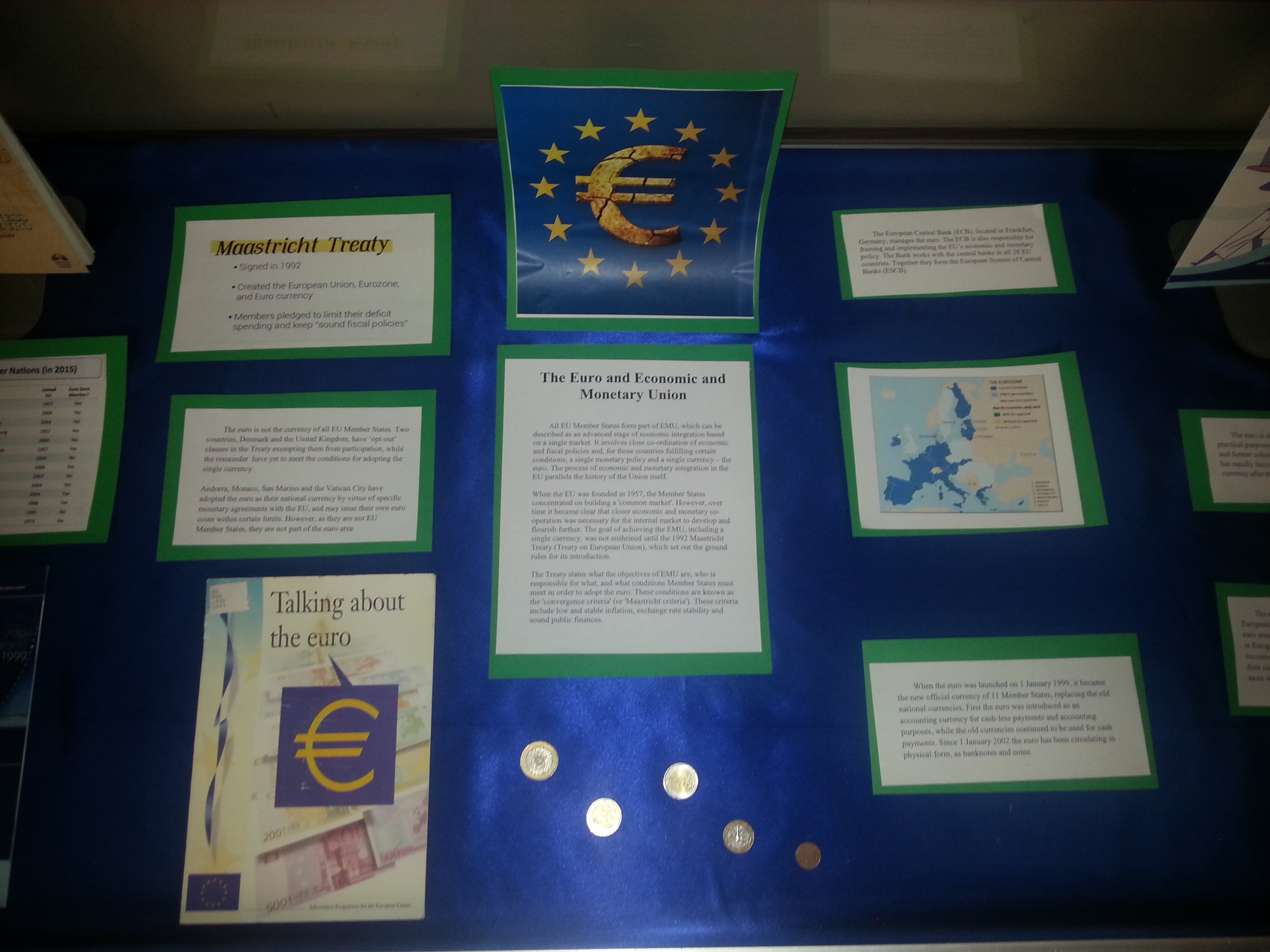 The goal of achieving the Economic Monetary Unit (EMU) was formulated by the 1992 Maastricht Treaty, or the Treaty on European Union. Setting the ground rules for its introduction, these conditions are known as the convergence criteria, or Maastricht criteria. The Treaty established the objectives of the EMU and the conditions Member States must meet in order to adopt the euro.
When the euro was launched on January 1, 1999, it became the new official currency of the European Union and its 11 Member States, replacing the old national currencies. Although the Euro has encountered difficulties, especially with the recent worldwide economic problems, the euro has continued to survive. 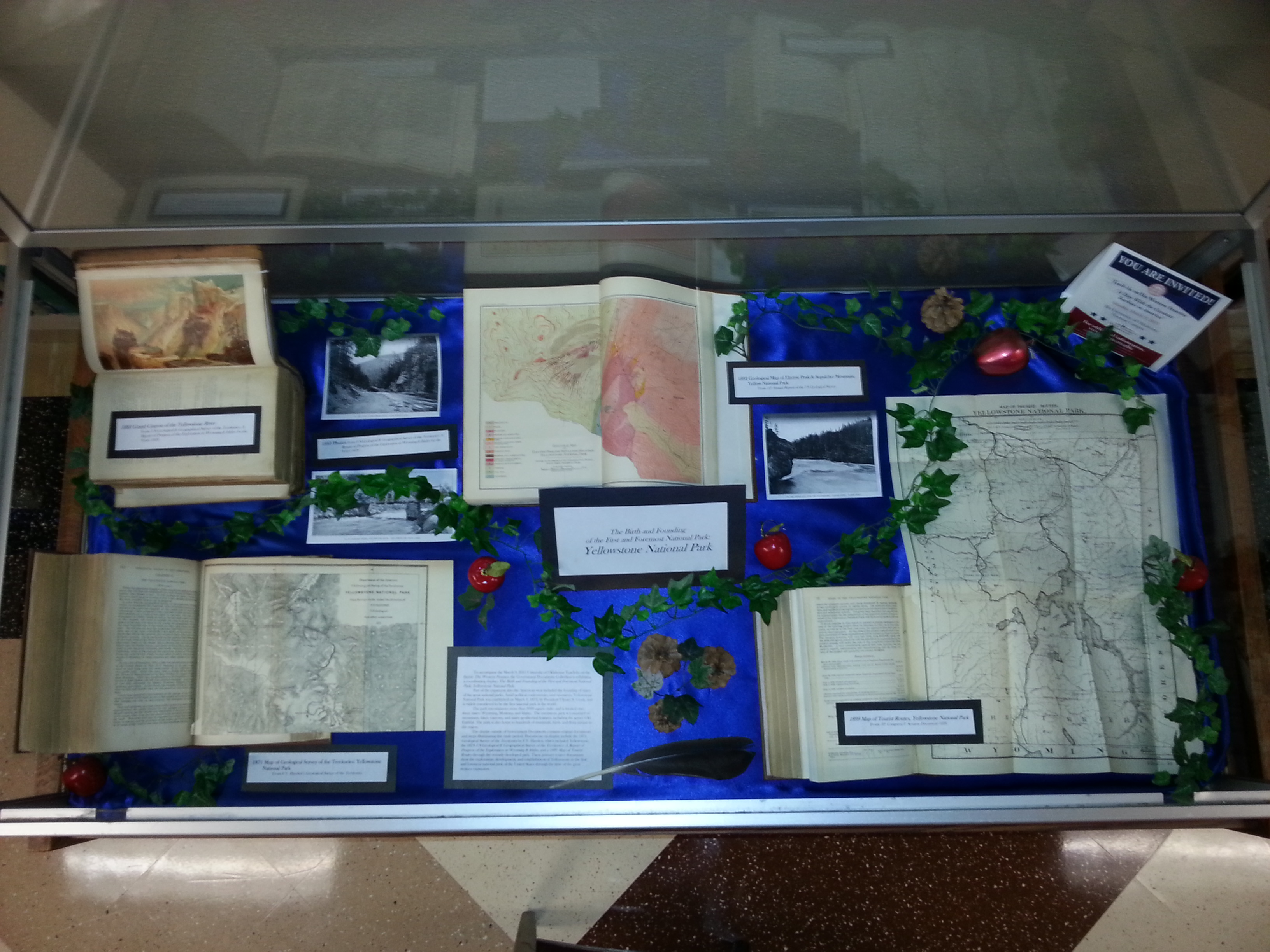 To accompany the March 9, 2015 University of Oklahoma Teach-In on the theme The Western Frontier, the Government Documents Collection is exhibiting a coordinating display: The Birth and Founding of the First and Foremost National Park: Yellowstone National Park.
Part of the expansion into the American west included the founding of many of the great national parks. Amid political controversies over resources, Yellowstone National Park was established on March 1, 1872, by President Ulysses S. Grant, and is widely considered to be the first national park in the world.
The park encompasses more than 3000 square miles and is located over three states: Wyoming, Montana, and Idaho.  The enormous park is comprised of mountains, lakes, canyons, and many geothermal features, including the geyser Old Faithful. The park is also home to hundreds of mammals, birds, and flora unique to the region.
The display outside of Government Documents contains original documents and maps illuminating this rustic period. Documents on display include the 1871 Geological Survey of the Territories by F.V. Hayden, which included Yellowstone, the 1878 US Geological & Geographical Survey of the Territories: A Report of Progress of the Exploration in Wyoming & Idaho, and an 1899 Map of Tourist Routes through the recently developed park. These primary source documents show the exploration, development, and establishment of Yellowstone as the first and foremost national park of the United States through the time of the great western expansion. 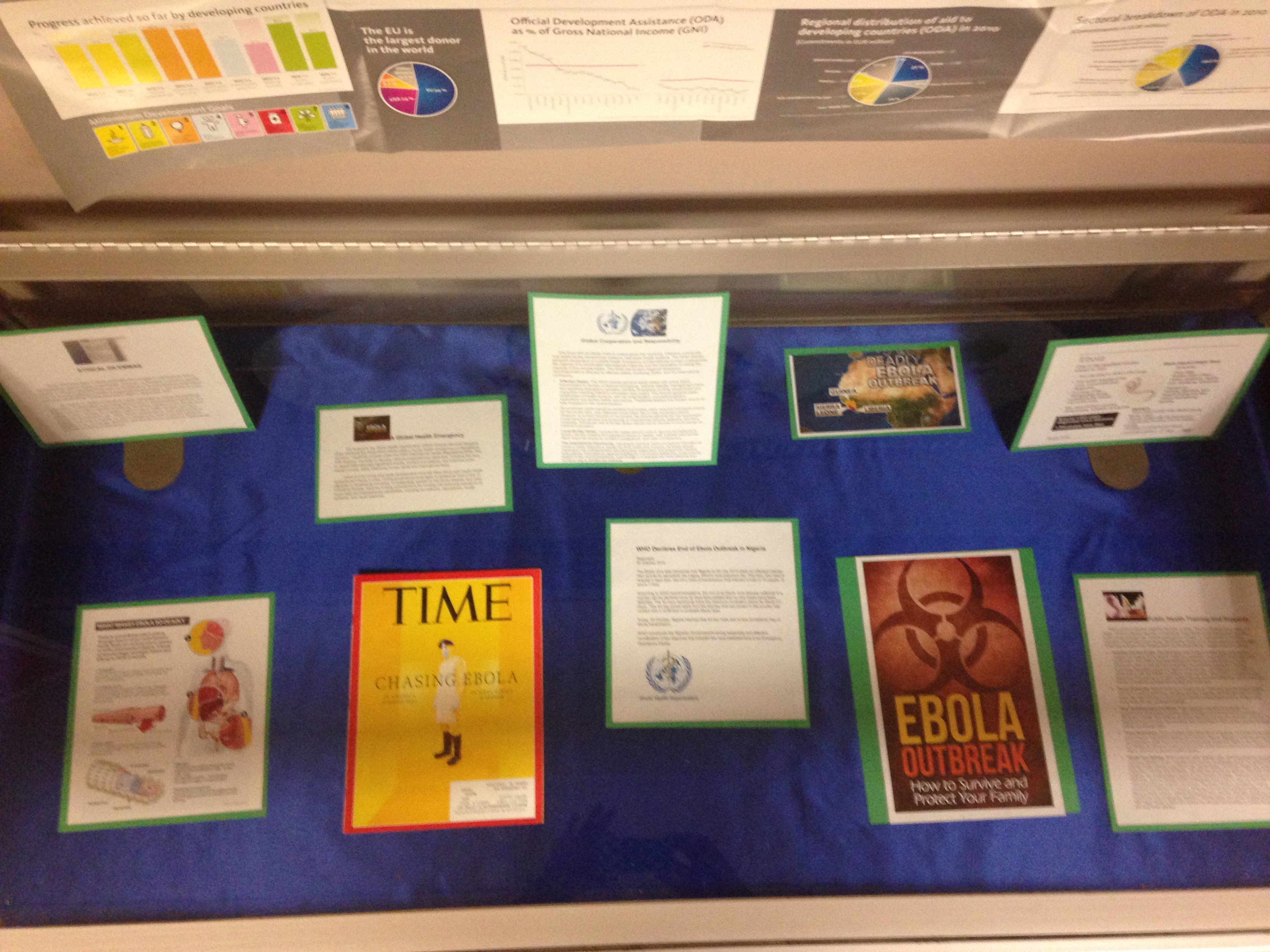 A display on the spread of the Ebola virus has been installed outside of the Government Documents Collection. The display, Ebola Outbreak: A Global Health Emergency details the current actions being taken by the World Health Organization and their call for a coordinated international response. Using information panels, the information is presented in a brief and concise manner to provide for a quick review of current policies related to the arrest of this horrible disease. 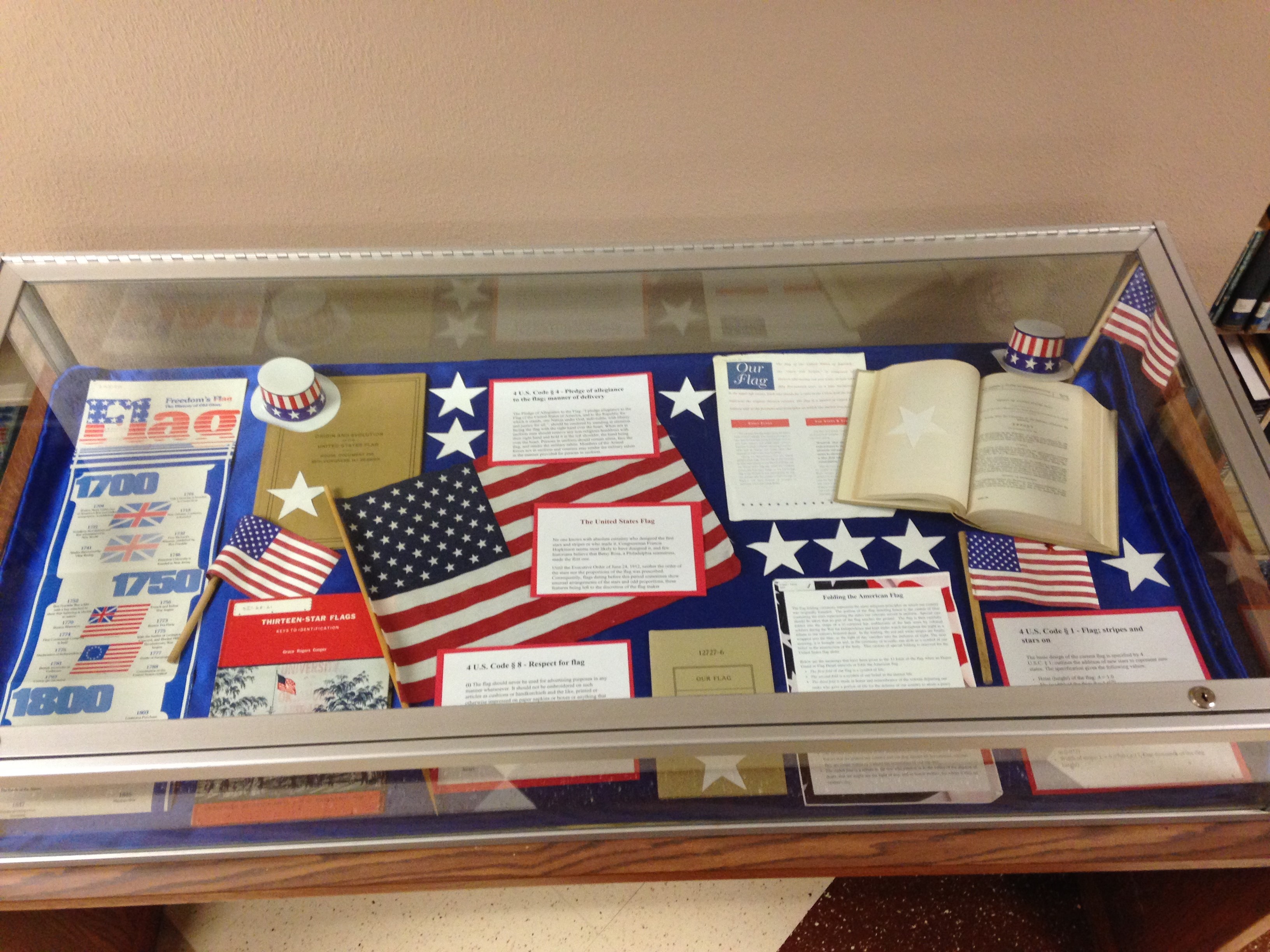 Government Documents celebrates the American Flag this fall with a display chronicling the birth and history of the United States flag. With federal and State of Oklahoma documents, the display explains the history and current etiquette required in flying and handling of the US Flag.

Fall 2014: A History of Oklahoma Display 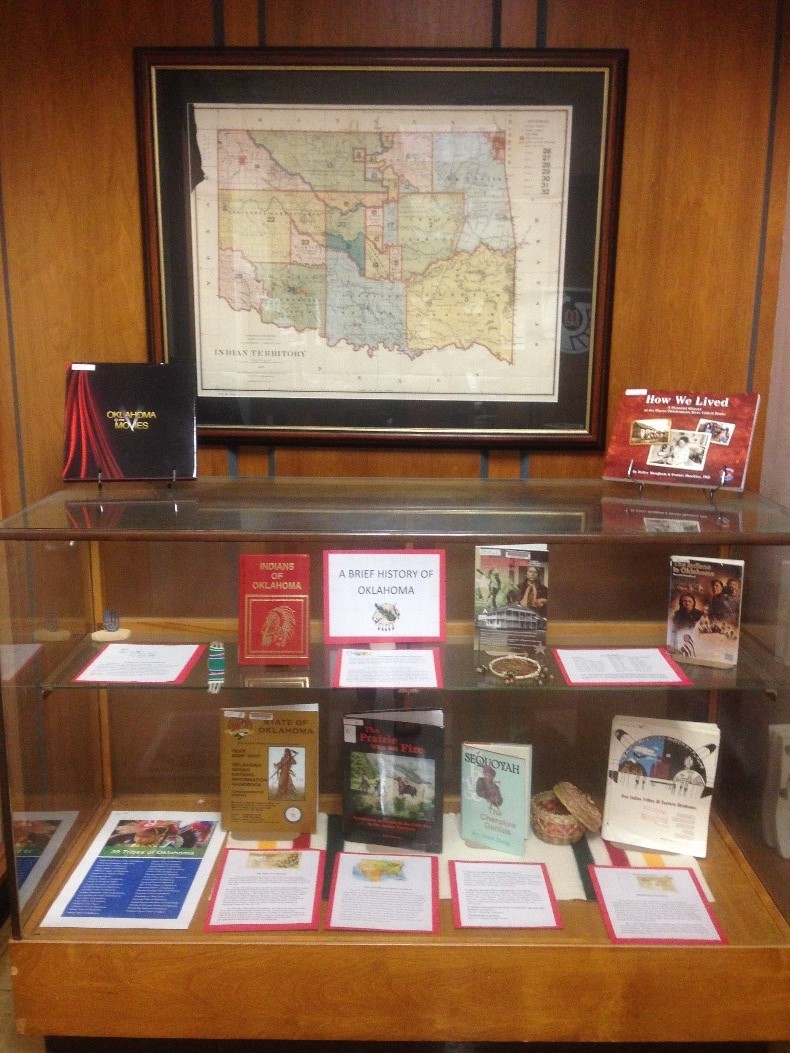 To view this display contact the Government Documents Collection to schedule an appointment. 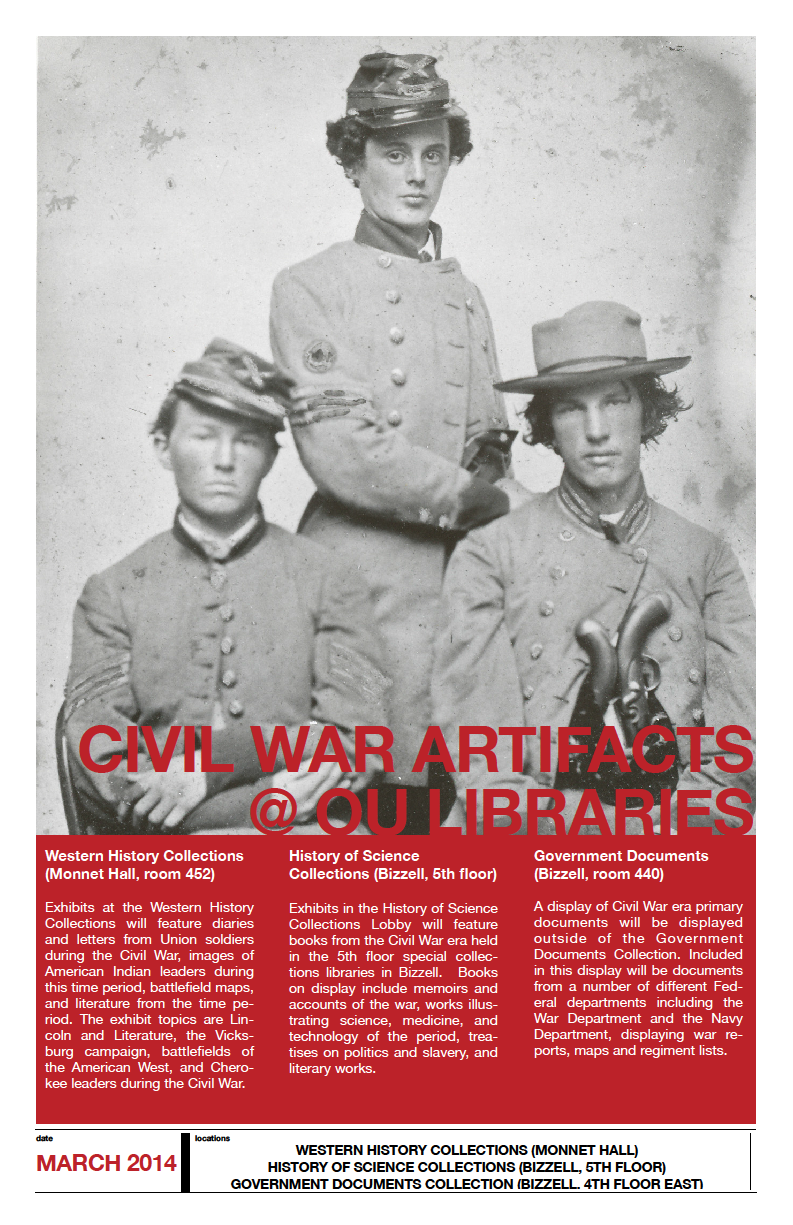 A display of Civil War era primary documents was displayed outside of the government Documents Collection to correspond to the 2013 OU History teach-In. The keynote speakers of the Teach-In included John Wilmerdig, an expert on the portray of historical moment through American art, and Ed Ayers one of the nation’s leading scholars on the history of the American south.  It was one of the single greatest days of teaching about this period in American history ever put together.

Included in the display were documents from a number of different federal departments including the War department and the Navy Department, displaying war reports, maps, and regiment lists.  Government Documents in the display included:

1902: Official Records of the Union and Confederate Navies in the War of the Rebellion, Series I, Volume 14, South Atlantic Blockading Squadron from April 7 to September 20, 1863

1866: The Assassination of Abraham Lincoln, Late President of the United States of American and the Attempted Assassination of William H. Seward,  Assistant Secretary, on the evening the 14th of April, 1863 Appendix to 1865 Diplomatic Correspondences

1902: Official Records of the Union and Confederate Navies in the War of the Rebellion, Series I, Volume 13, South Atlantic Blockading Squadron from May 14, 1862 to April 7, 1863 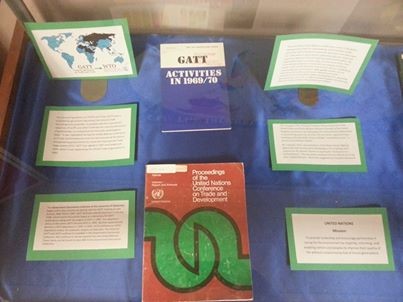 The Government Documents Collection has developed a new display noting the emergence of the General Agreement on Tariffs and Trade (GATT) and the World Trade Organization (WTO) from the formation of The United Nations (UN). The display, located on the south end of the hallway outside Government Documents, is available for viewing during normal library hours.

On 1 January 1942, representatives of 26 Allied nations fighting against the Axis Powers met in Washington, D.C. to pledge their support for the Atlantic Charter by signing the "Declaration by United Nations." This document contained the first official use of the term "United Nations," which was suggested by President Roosevelt.

SUMMER 2013: The History of the Government Printing Office 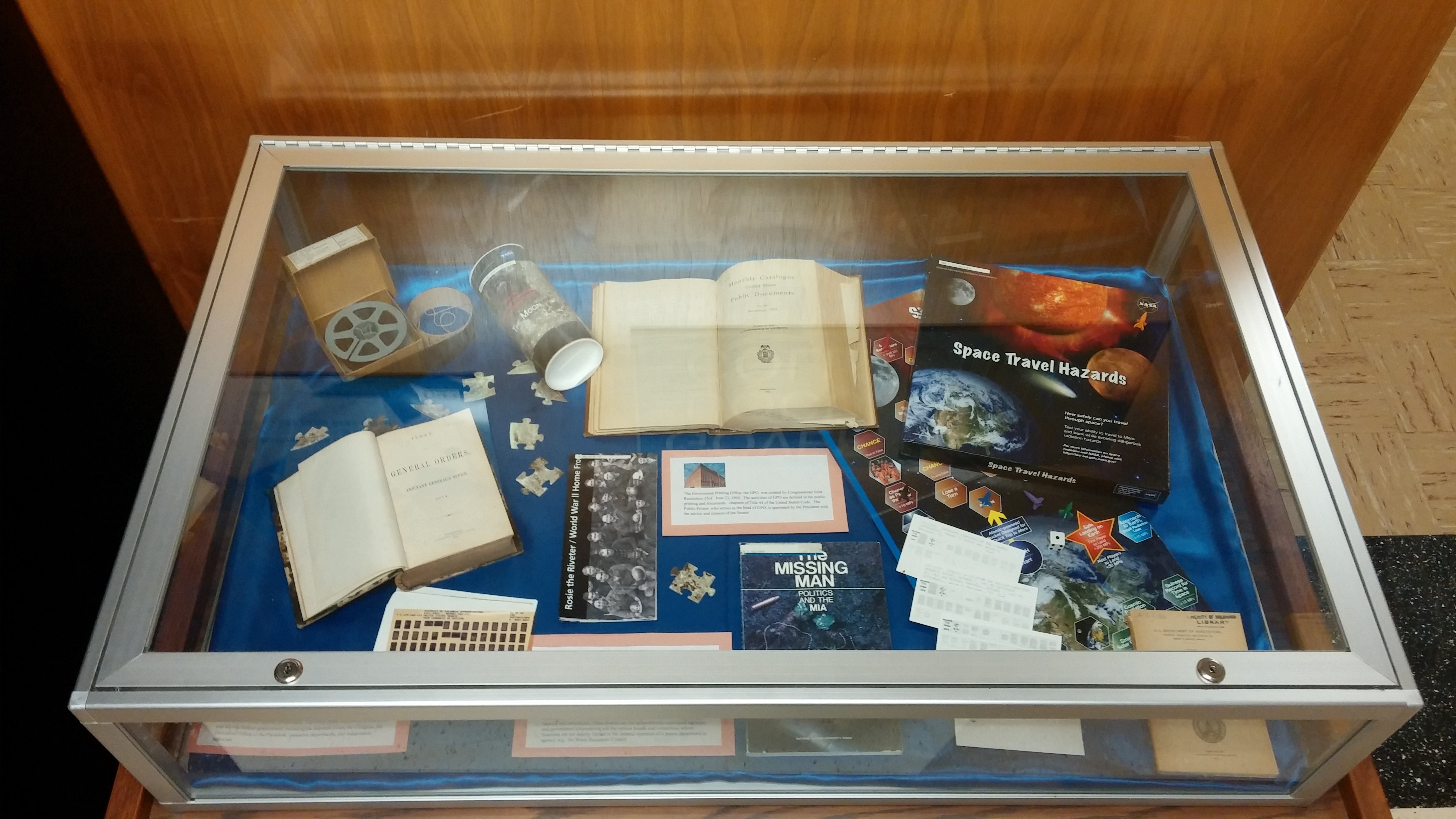 Established in 1861, on the same day that Abraham Lincoln was inaugurated President, the Government Printing Office has a storied 150-year history of producing government information. This display tracks the history of the GPO and shows their myriad production of not only books, magazine, posters, and maps, but also puzzles and board games.