This guide describes how a bill becomes a law in Oklahoma, and how to track the background (history) of a specific law from its inception as an introduced bill.

This guide was originally created by Jennifer Gerrish who has retired.  It is now updated and maintained by the Law Library Reference Staff.

How does a bill become a law in Oklahoma?

Black's Law Dictionary defines legislative history as "the background and events leading to the enactment of a statute, including hearings, committee reports, and floor debates."  So in order to understand and create a legislative history, one must understand the process by which laws, or statutes, are created.

How does a bill become a law (statute) in Oklahoma?    All laws originate as bills.  A legislator introduces a bill in the House Chamber or the Senate Chamber of the Oklahoma Legislature.  A summary of the bill is read aloud to the chamber.  The bill is then sent to a specific committee in the chamber for study and recommendations, and is then returned to the chamber for a vote to pass or a vote for further study by the committee.  If the bill is passed by the chamber of origin, it is then sent to the other chamber.  At this stage of its development, the bill is "engrossed".

An engrossed bill may be amended by the other chamber, and then it may go to a conference committee composed of members of both chambers.  The conference committee may also make amendments to the bill.   A bill may not receive any amendments.  Whether passed in its original form or in its amended form, a bill that passes both chambers is called "enrolled".  Enrolled bills go to the governor for signature.  The bill becomes a law when the governor signs the bill.

The law is called a session law before it is placed into the statory code.  Laws passed during a legislative session are published in the Oklahoma Session Laws, which are chronologically arranged.  Session laws are then codified, placed into the statutory code, in a subject arrangement.  The Oklahoma Statutes contain all the laws in force in the state of Oklahoma as of the time of publication.

Glossary of Legislative Terms provided by the Oklahoma Senate 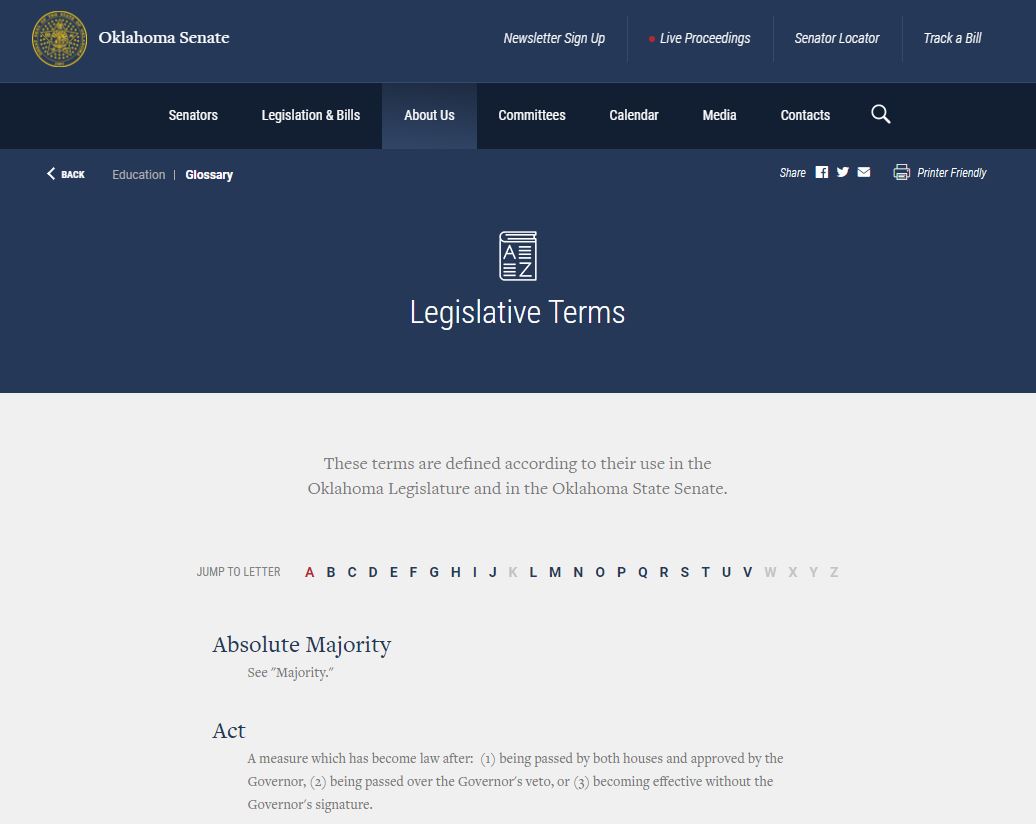 Documents and records needed to create a legislative history

1.  The original bill, as introduced.

2.  The bill summary (a brief description of the bill's provisions)

4.  Amended versions of the bill.

5.  Enrolled version of the bill.

6.  Hearings and debates associated with the bill.

7.  Taskforce Reports (a legislative taskforce performs extensive research on a specific issue, and may issue a report).

8.  Interim Study Reports (conducted by the standing committees of the House and approved by the Speaker of the House).

9.  Senate or House Resolutions (officially records the opinion of the house of origin when passed only by that chamber).

10.  Senate or House Concurrent Resolutions (officially records the joint opinion of both houses when passed by both and signed by the governor).

Journals are the official record of legislative proceedings. Each house issues its own daily journal for each day of the session and a corrected, indexed and bound permanent journal after the close of the session. 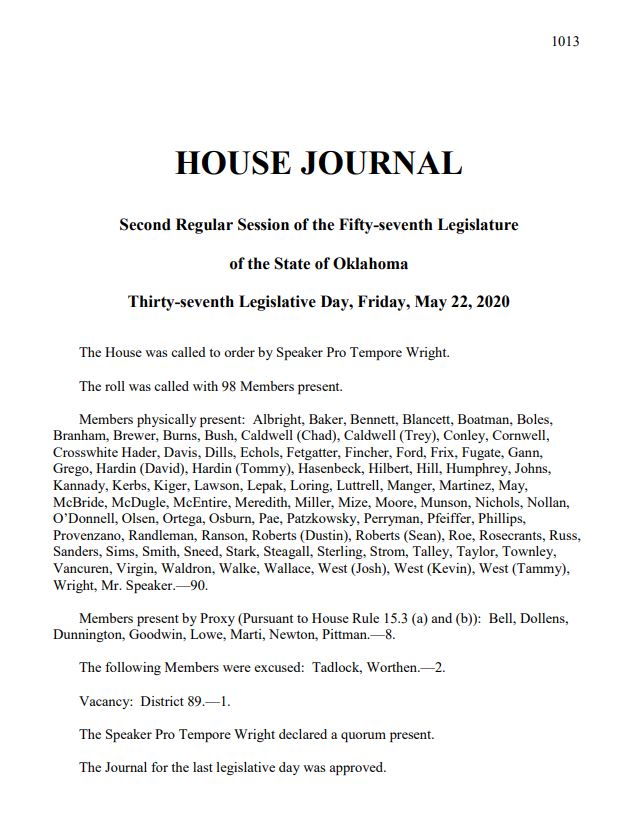 Oklahoma Video Resource also document actions on the floor of the Senate and House as well as some Committee actions.