Guide to primary sources in the history of science, technology & medicine

The Edward B. Davis Collection includes numerous books chiefly related to the Scientific Revolution, particularly the work of Robert Boyle, and science and religion in 19th-20th century America, particularly debates over evolution and geology. Davis, Professor of the History of Science emeritus at Messiah College, Pennsylvania, is an affiliate of the University of Oklahoma Department of the History of Science, Technology, and Medicine.

The Everett Lee DeGolyer Collection: The History of Science Collections began in 1949 with the founding gift of 129 rare books by Everette Lee DeGolyer, an alumnus of the OU geology school. ¶ DeGolyer initially lent the 129 volumes to the University, with a promise to transfer ownership only if and when a suitable teaching and research program could be established. DeGolyer asserted that the books should not become showpieces in a lifeless collection, but rather objects of research in the service of education. He negotiated a commitment by the university to establish a teaching program, telling OU President George Cross, “You provide the faculty, I'll provide the books.” Throughout its history, the mission of the OU history of science program has grown out of that same conviction: to offer thought-provoking interdisciplinary instruction to undergraduates; to mentor graduate students, the next generation of historians of science; and to contribute significant research in the history of science. ¶  In 1954, a checklist of the DeGolyer Collection included ## titles (https://ou-primo.hosted.exlibrisgroup.com/permalink/f/bqqc6e/NORMANLAW_ALMA21411723860002042 ). DeGolyer eventually donated 6,000 volumes to what was then known as the DeGolyer Collection. The name was changed to History of Science Collections (plural) with the acquisition of additional major gifts, including the James G. Harlow, Sr. and Paul E. Klopsteg collections.

Computer Collection: The History of Science Collections holds more than 50 personal computers from the 1970s, 80s, and 90s, all of which are in working condition. Many computer sets include peripheral devices; some retain their original packaging. After Marion Dilbeck donated an initial computer collection in 2001, the collection has continued to grow. Items include an Osborne 1, Cromemco Z-2D, Timex Sinclair, Atari 400, Atari 800, RadioShack TRS 80, Commodore 64, Intel MCS-86, and a NeXTstation Color. A variety of early Macs include the original 1984 Mac, the later 1984 Mac revision, Mac SE, Mac Classic, Mac Color Classic, and a PowerBook 140. Also included are manuals, posters, ephemera, and trade journals such as Byte magazine.

This page provides overviews of named collections within the History of Science Collections.  To identify materials in these collections, search OU Libraries online catalog Discover Local using search terms that include the donors names.

Collections are listed by last name, or by topic area (Geology, Meteorology)

The George Jones Goodman Collection primarily contains the offprints, preprints, and reprints given to Dr. George J. Goodman and the History of Science Collections in botany and Western European History of Science.  Goodman (1904-1999) was a botanist, Professor, and Curator Emeritus of the Bebb Herbarium, University of Oklahoma.

The Harlow Collection is a collection of books in the history of science given in the memory of James G. Harlow Senior.  There is a printed catalog for the collection: 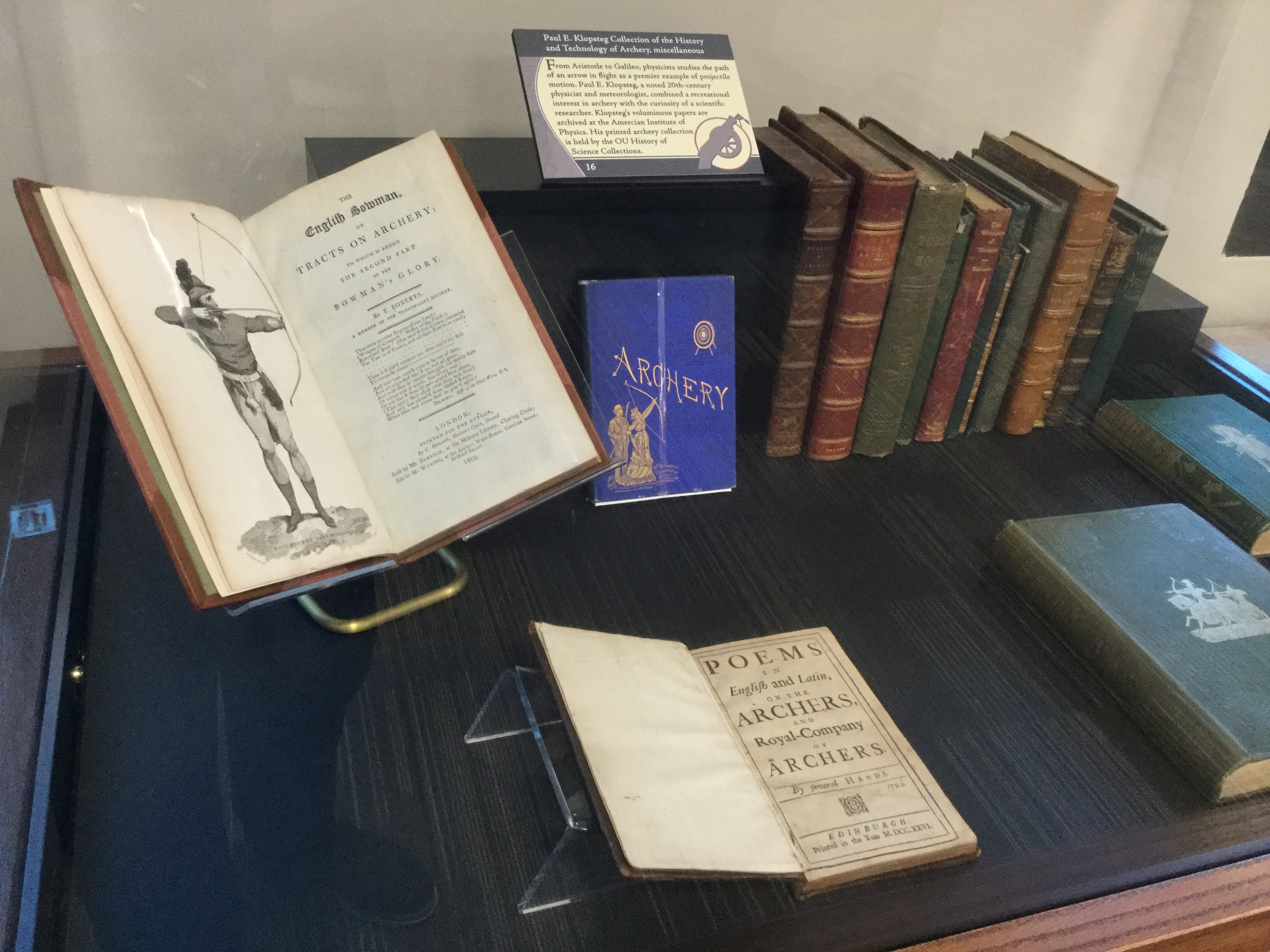 The Paul E. Klopsteg Collection contains books, journals, photographs,  correspondence and ephemera covering a range of topics related to archery. The Collection includes items written by Klopsteg, including his personal copy of Turkish Archery and the Composite Bow (1934). There are also several books which include a book plate with Klopsteg’s name or which have notes or inscriptions written on their pages by Klopsteg, the author, or a previous owner.

Of the over 600 works collected, nearly 60 are from the 1800s, 7 from the 1700s, 4 from the 1600s and 5 date back to the 1500s (including a woodcut from Muenster’s Cosmographia). While the majority of the collection is in English, there are also works in French, German, Japanese, Turkish, and Arabic.

The Douglas K. Lilly Collection consists of publications, papers, correspondence, and realia of Lilly, a professor of meteorology at the University of Oklahoma. These include Lilly’s correspondence (1991-1993) as Director of the Center for the Analysis and Prediction of Storms. Also included are cards, personal letters, the Rossby Research Medal from the American Meteorological Society, and photographs of Lilly, his family, and colleagues.

Bill Moore Collection: This collection of books, donated by renowned Oklahoma space historian Bill Moore, explores how aviators, astronauts, scientists and engineers from Oklahoma have participated in aerospace activities throughout the history of the state.

​​​​​​​Jens Rud Nielsen Archive consists of correspondence, publications, and research materials from the life and career of University of Oklahoma physics professor J. Rud Nielsen (1894-1979), who was a student of Niels Bohr in Copenhagen. The papers focus on Nielsen’s research files, publications, and collected works by other authors. The research files include his work on early volumes of Niels Bohr’s Collected Works; his research on molecular structure using Raman spectroscopy; reports of grant and contract projects for the Office of Naval Research, National Science Foundation, and the U.S. Atomic Energy Commission; and materials for physics courses taught at OU. Other materials document OU Physics Department events such as Niels Bohr’s visits to the Norman campus for public lectures. The collection also includes 1,041 glass slides depicting research results and physics principles; and printing blocks of graphics for articles in the Journal of the Optical Society of America and the Journal of Chemical Physics. ¶ A handwritten manuscript Nielsen composed as a memoir of Niels Bohr is cataloged separately in the History of Science Collections.

The Duane H. D. Roller Collection consists of books and papers. Roller was hired in 1954 as the first Curator and professor of the history of science. He worked with DeGolyer and other donors to build the core collections, which established the University of Oklahoma as an international center for broad-based research in every subject area of the history of science. Roller retired in 1990. Few of his students realized Roller was an avid reader of pulp science fiction magazines, which make up the bulk of his donated books. Roller’s father, Duane H. Roller, was a physicist at the University of Oklahoma who also donated books to the Collections.

The Léo Laporte Archive: Laporte, a renowned geologist at the University of California, Santa Cruz, is the foremost biographer of G. G. Simpson, whose work in paleontology provided a foundation for the early 20th-century Neo-Darwinian evolutionary synthesis. For this work, Laporte received the Mary C. Rabbitt Award from the Geological Society of America. The Laporte Archive consists of papers from his researches in the history of geology, especially pertaining to Simpson and Charles Darwin.

The Martin J. S. Rudwick Collection consists of the books and papers of the distinguished historian of geology Martin J. S. Rudwick. It includes more than 1,200 donated print volumes, including Rudwick’s own annotated copy of Charles Lyell, Principles of Geology (1830-1833). In addition to his research notes and correspondence, the Martin J. S. Rudwick Archive includes original historical items such as disbound portraits and hand-colored plates. Rudwick is known for pioneering contributions to the history of geological mapping, visual illustrations, the social construction of geology, and the rise of geohistory. See https://libraries.ou.edu/content/rudwick-donations

The Kenneth L. Taylor Collection consists of the books and papers of Kenneth L. Taylor, OU Professor Emeritus of the History of Science. ¶ Prof. Taylor’s research in the disciplinary, national, and intellectual contexts for the emergence of geology produced classic papers that remain foundational to subsequent research on science in the Enlightenment and the history of French science. Taylor’s many publications on Desmarest and Buffon began to rehabilitate the frequently-dismissed tradition of Theories of the Earth. His early studies of geological mapping demonstrated the importance of attending to illustrations as intellectual achievements in their own right at a time when the visual dimensions of texts were too often disregarded as merely decorative ornamentation. With these and other investigations, Prof. Taylor’s oeuvre centered the history of geology in broader conversations about the role of natural regularities and historical contingency in the history science. See https://libraries.ou.edu/content/taylor-donation

The Hugh S. Torrens Collection: consists of the books and papers of the distinguished historian of geology Hugh S. Torrens. Torrens’ nearly 400 publications (listed at hugh.torrens.org and still growing) cluster around a common theme of the historical relations between industrialization and geology. Torrens’ passion has been to recover the voices of invisible and forgotten figures who may have left no books but whose labors led to major discoveries and achievements in geology, whether an iron worker in the English Industrial Revolution or a British mining engineer whose expertise was coveted around the world. Torrens reconstructs their lives and contributions from a signature on a machine, a debtor’s note, a travel log, or a bill of sale. ¶ Torrens has devoted considerable scholarly attention to William Smith and Mary Anning. William Smith, creator of the single most renowned geological map, was a working-class canal surveyor by trade, whose famous map led not to honor but to confinement in debtor’s prison. Mary Anning, a working-class discoverer of dinosaur fossils near Lyme Regis, in Dorset, made a lot of gentlemen geologists famous. The Torrens archive is rich in materials related to these figures and their associates and contemporaries. See https://libraries.ou.edu/content/torrens-donation

The Gary Grice Collection in meteorology contains more than 200 volumes from the early 1800s to the mid 20th century. These books and booklets vary from theory and conceptual models to operational manuals of the U.S. Signal Service (1871-1891) and Weather Bureau (subsequent to 1891). The Grice Archive contains more than 200 photographs of old weather instruments and meteorological facilities. ¶ Grice also donated a barometer made for the Signal Service in the 1880s, which is in the Instruments and Artifacts Archive.

The Herbert Holl Collection contains the books and papers of Herbert Holl, who trained in Germany in the optics and physics of the atmosphere before World War II. His life and work represents a significant moment in the development of German physics before the second world war. The Holl Collection represents the books used by a generation of German scientists; many are very difficult to find in the United States. In important ways Herbert Holl exemplifies the influential community of German scientists who emigrated after the war to Huntsville, Alabama, and established a distinctive scientific and civic culture famously associated with the name of Werner von Braun.

The National Severe Storms Laboratory Archive contains papers beginning with the origin of the NSSL. Additional papers cover the NASA-Langley Lightning Research Project (1986) and the work of Leonard Benedict Loeb (1891-1978).

The Ronald K. Taylor Collection in meteorology, which includes both books and papers, was donated by Ming Ying Wei. Ronald K. Taylor was a 20th-century climatologist who worked for NOAA/NASA in Maryland. He was an early researcher of Antarctic changes with an eye to how climate change might affect global agriculture. Ming Ying Wei was the first female graduate from OU with a doctorate in meteorology. She also worked for NOAA/NASA in Maryland. Wei donated Taylor’s books to the Collections and they are being added to the cataloged print holdings. ¶ Wei has sponsored an annual dissertation fellowship in the history of meteorology for the Department of the History of Science, Technology, and Medicine.